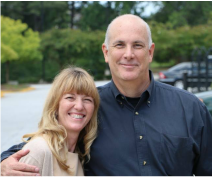 Ken and Kat Watson
Assistant Ministry Servants
Ken and Kat Watson became a part of the International Churches of Christ in 1990 in Atlanta, where they were members of the Atlanta Church of Christ in Gwinnett and served as Bible talk leaders and in the worship ministry. They moved to Auburn in 2009 after Ken accepted a job with Delta Data Software in nearby Columbus, GA. Kat continued to work in television for Challenger Films for a period, but now uses her time to meet ministry and family needs. They have three grown children, Celeste, Max and Devon. As empty-nesters in a new phase of life, they feel like they have been blessed beyond imagining in serving the Auburn Tuskegee church.